Founding Martyr: the Life and Death of Dr. Joseph Warren 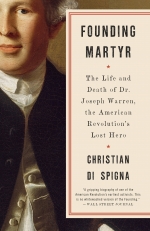 "Founding Martyr" is an illuminating biography of America's forgotten Founding Father, Dr. Joseph Warren, the patriot physician and major general who incited rebellion and died heroically at the Battle of Bunker Hill on the brink of revolution. Warren was involved in almost every major insurrectionary act in the Boston area for a decade, from the Stamp Act protests and the Boston Massacre to the Boston Tea Party. His incendiary writings included the famous Suffolk Resolves, which helped unite the colonies against Britain and inspired the Declaration of Independence.

In his presentation, author Christian Di Spigna will talk about the new discoveries he made about Dr. Warren. He'll deconstruct the many Warren legends and explore his resistance activities between 1765-1775 as he rose to the heights of power.

Mr. Di Spigna graduated with a degree in history from Columbia University, where he began his research on Warren. He lives in Williamsburg, Virginia and volunteers for the Colonial Williamsburg Foundation, in addition to working closely with many period scholars.

To register, fill out the form below, call 781-769-0200 x110, or stop by the library Reference or Information Desk. This program is being presented in collaboration with Orient Lodge of Norwood.

To register for this event, fill out the form below, call 781-769-0200, x110, or stop by the library Reference or Information Desk. This program is being presented in collaboration with Orient Lodge in Norwood.