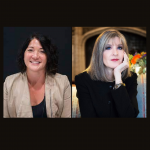 Start off the New Year with a virtual visit from two favorite authors and the Morrill Memorial Library. On Monday, January 24 at 7:00 pm, join Hank Phillippi Ryan in conversation with Alafair Burke via Zoom.

About Alafair Burke: Alafair Burke is the New York Times, Edgar Award nominated author of twenty crime novels. Published in more than twenty languages, her books have been featured on “Best Book” lists from the Today Show, Entertainment Weekly, People, O (Oprah Magazine), The Boston Globe, Washington Post, Sun Sentinel, Amazon, Barnes & Noble, and numerous other outlets.  She has been called “a genius for plot” and “one of our greatest contemporary mystery writers.”   She is the current President of Mystery Writers of America and the first woman of color to be elected to that position. In addition to her own work, Alafair also co-authored the “Under Suspicion” series with Queen of Suspense Mary Higgins Clark. Her latest novel, Find Me, will be released in mid-January 2022. Learn more about Alafair and her work, HERE.

About Hank Phillippi Ryan: Hank Phillippi Ryan is the USA Today bestselling author of 13 thrillers, winning the most prestigious awards in the genre: five Agathas, four Anthonys, and the coveted Mary Higgins Clark Award. She is also on-air investigative reporter for Boston’s WHDH-TV, with 37 EMMYs and dozens more journalism honors. Book critics call her “a master of suspense,” “a superb and gifted storyteller,” and she’s the only author to have won the Agatha in four different categories: Best First, Best Novel, Best Short Story and Best Non-Fiction. Her 2019 standalone, The Murder List, won the Anthony Award for Best Novel. Her latest novel, Her Perfect Life, was released Fall 2021 and received starred reviews from Kirkus Reviews and Publishers Weekly, which called it “A superlative thriller.” Learn more about Hank and her work, HERE.

This event is hosted in collaboration with Haley Booksellers and Massachusetts Public Libraries. Signed copies of both Burke's and Ryan's latest books will be available for sale before and during the event from our bookstore partner, Haley Booksellers.

Registration is required. Please fill out the form below to sign up, or call the Reference Desk at 781-769-0200 x2. Zoom access details will be sent in a reminder email prior to the program.